Yakikai, what a funny name to say. 🙂  ‘Tis the season to forget about that diet and indulge, as they say, and Yakikai is definitely a place to indulge our appetite. 🙂  A couple of days ago I had the opportunity to eat at Yakikai Grill and Fusion Buffet located at Scout Dr. Lazcano Street near Tomas Morato in Quezon City.  For those who can’t quite imagine where this is, your nearest landmark would be Starbucks Reserve across from BPI on Tomas Morato Avenue.  Yakikai is on the block where Starbucks is. 🙂

This restaurant was easy for me to find for these reasons: 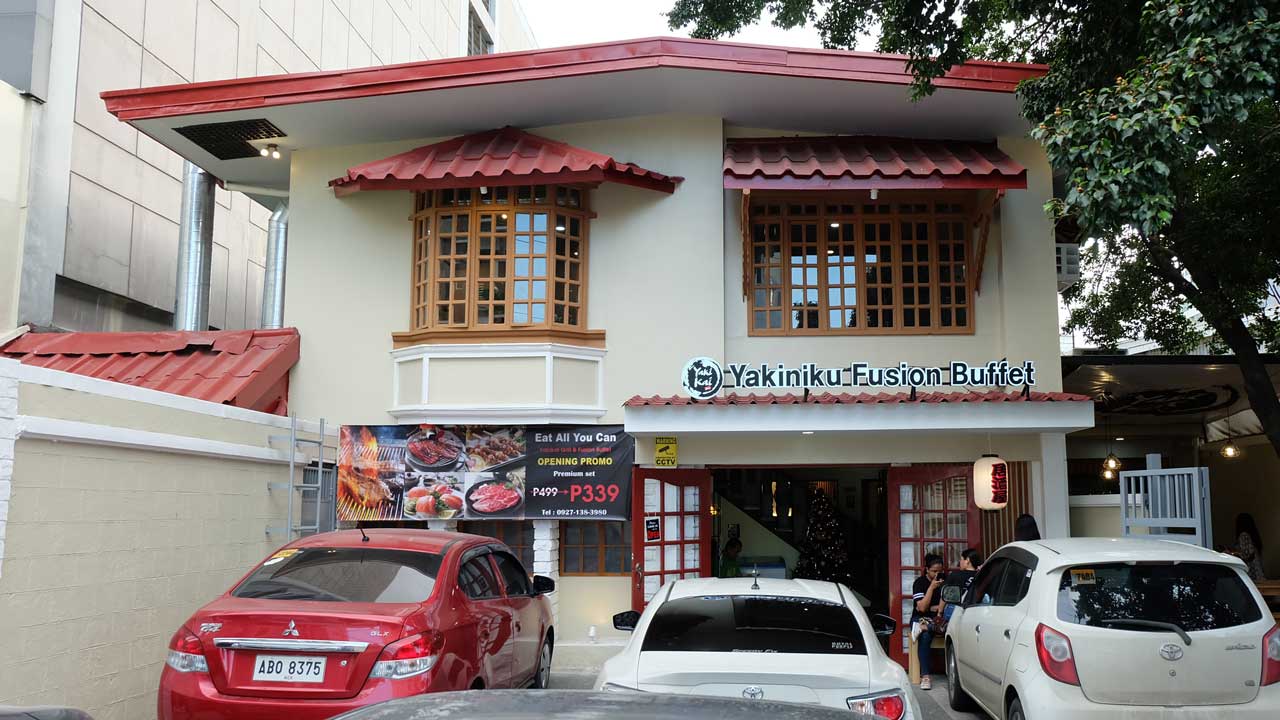 For people with cars, if you arrive early enough you can park right in front of Yakikai, otherwise, your next available parking will be on Tomas Morato.  Not to worry, though, as Tomas Morato is a very short distance from the restaurant … very walkable.

The first time I heard about Yakikai I couldn’t help but wonder if this was going to be any different from other samgyupsal restaurants I have visited in the past.  While there are definitely similarities, the owner, Ms. Sam, introduced us to some features that make this restaurant stand out.  FYI, Ms. Sam used to be the owner of Sodam, a samgyupsal restaurant in Greenhills, which she has since sold before she opened this place.

Since I have been to this building before when it was a different restaurant I was interested to note if they changed anything about its appearance or layout.  So far, they have made the dining area brighter and, of course, there is the addition of the ventilation pipes for the hoods over each table.

It is important to note that there are two gender-neutral restrooms, one on each floor.  This is a carryover from Bagoong Club.  However, I wish they could maintain it better.  One tip I would possibly give them is to have one of their staff check the restrooms every 30 minutes or every hour to make sure it is still clean (and not stinky) and clean it when necessary. 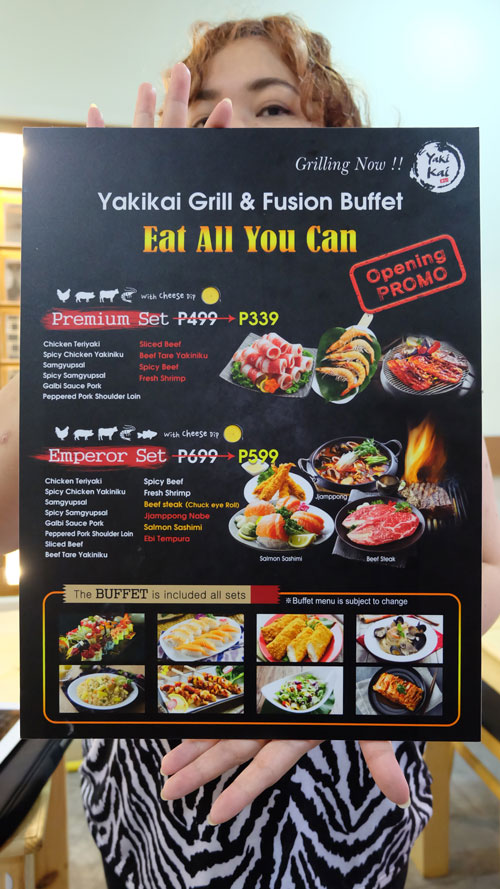 As with other restaurants they have an ala carte menu and an “eat all you can” menu.  In this review, I will focus on the latter because this is the menu that they really want to push.  That is my gorgeous sister holding up the menu for me. 😀

They only have 2 sets to choose from.  The premium set and the emperor set.

The first is the PREMIUM SET.  This was originally priced at P499 but, at the moment is available for P339.  Unlike other restaurants, this package is composed of chicken, pork, beef, and shrimp, cheese, plus the buffet!  Talk about value for money.

The meat selection is basically the same as what you would find in every other samgyupsal place but the addition of the shrimp and cheese (which is a mix of cheddar and mozzarella cheese) at no extra cost brings them up a notch.  I even noticed that there was one table that ordered just the fresh shrimp!  That was so smart!  I should do that next time. 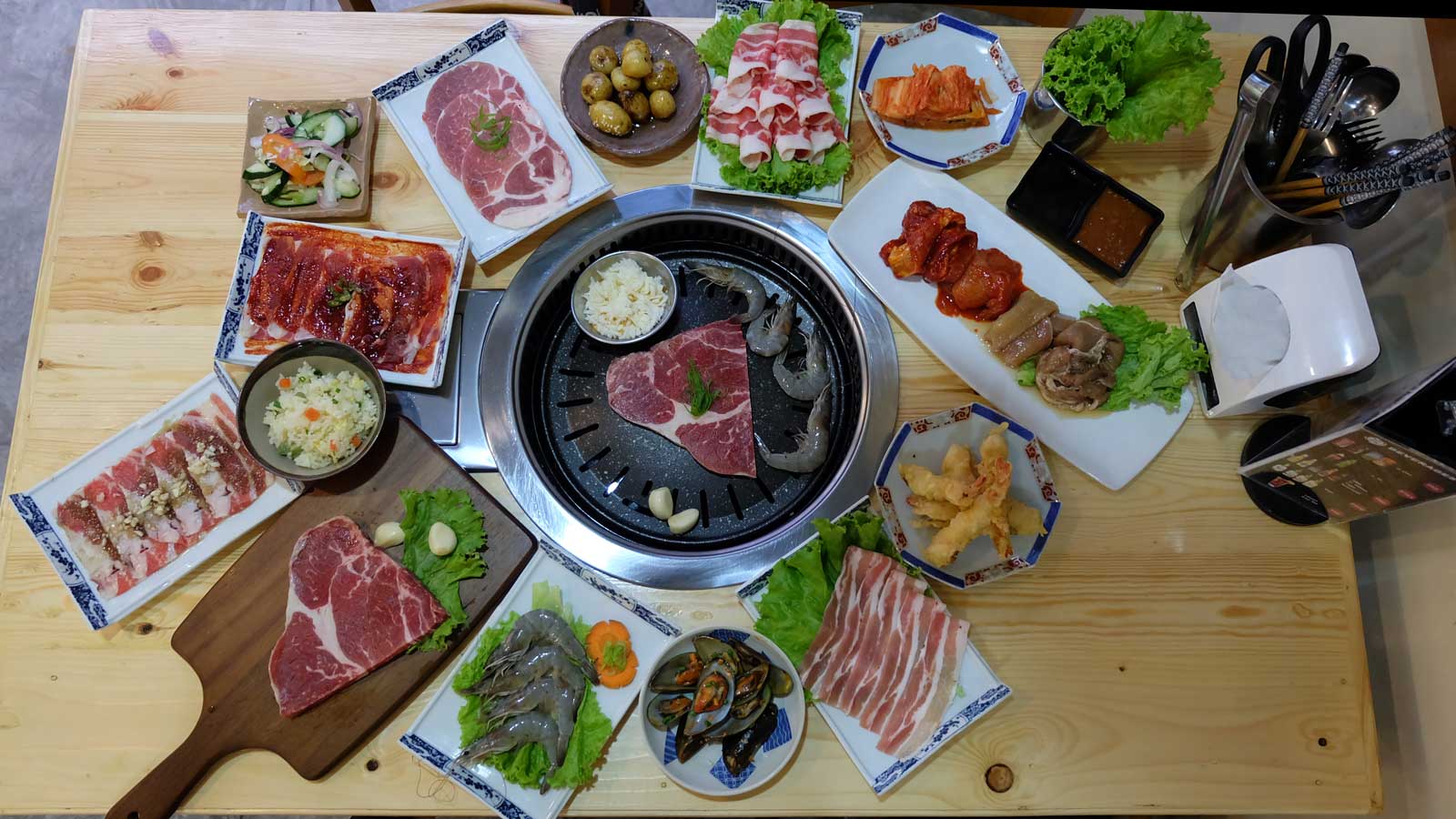 The second set is called the EMPEROR SET and is, of course, the one they highly recommend.  Originally priced at P699, it is currently available for P599.  The emperor set is composed of chicken, pork, beef, shrimp, fish, Jjampong nabe soup, and cheese!  Specifically, what makes the emperor set are the following: 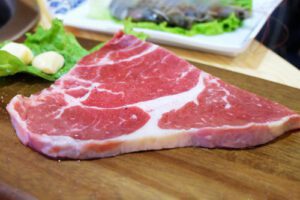 When cooking any kind of meat (and steak especially) it is important to know when to stop cooking it so that the meat is still edible.  When it comes to the steak which compared to the other meats served is thick, cooking it too long will make the steak hard and dry.  Your goal should always be medium.  Some like it medium-rare, others medium-well.

We asked Ms. Sam if they served tuna sashimi aside from salmon sashimi and she said that they don’t serve tuna as it spoils faster so if it is not consumed quickly they end up throwing it away.  Salmon, on the other hand, handles better and lasts longer.  I love salmon anyway so this was no hardship for me. 😀

The Jjampong Nabe might be removed from the menu as they have received feedback that many patrons find it too spicy.  They are still thinking about what to replace it with if they decide to remove it.  Any suggestions?

Both the premium and emperor set comes with the buffet which is self-service and you can go back as often as you want and get as much as you want.

At first, it would appear as though the buffet offerings are limited, but as each dish is emptied, it is replaced with a different dish (if similar) dish, which makes for an almost limitless buffet. 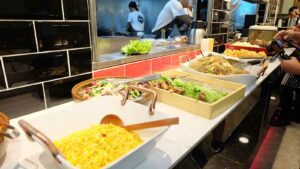 In this photo here you can see that the options have already changed.  The dishes that I kept going back for are the shredded sweet Japanese corn and the japchae.  For those who do not know, japchae is a Korean noodle dish made with vermicelli noodles with vegetables and beef tossed in.

Sushi options at the buffet 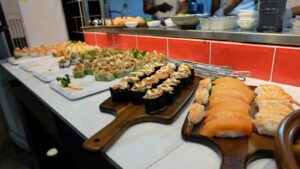 On the far left of the buffet is a selection of different kinds of sushi from the all-time favorite California Maki to salmon, shrimp, and tamago (egg) variations. At the window above the buffet are the chefs who were busy preparing refills of all the dishes in the buffet.

I am very keen on anything spicy I sampled the spicy tuna.  The sushi tasted as expected, which is a good thing. 🙂  I had a few pieces of spicy tuna and tamago sushi. 😀

Is “buffet only” an option?

We asked Ms. Sam if it were possible for guests to order just the buffet and no grilling and she said no.  When I think about it, though, that really isn’t too bad since the price of their premium set is not really that expensive.

I ate all I could and there were still so many dishes that I was not able to taste.  A tip to beginners, make sure you are hungry when you go here because I promise you, there is almost no waiting time between sitting at your table and eating.  While they set up your table you could already start on the buffet.

2021 Mantra: Finally Breaking Free from Itch. Yes, I Can

Bring Out the Strongest Version of You with Pantene

Constantly Tired? You May Be Experiencing A Case of Iron Deficiency Anemia

Holiday Gift Ideas for Your Loved Ones

Phoenix Fuels Offered At 80% Off On Limitless