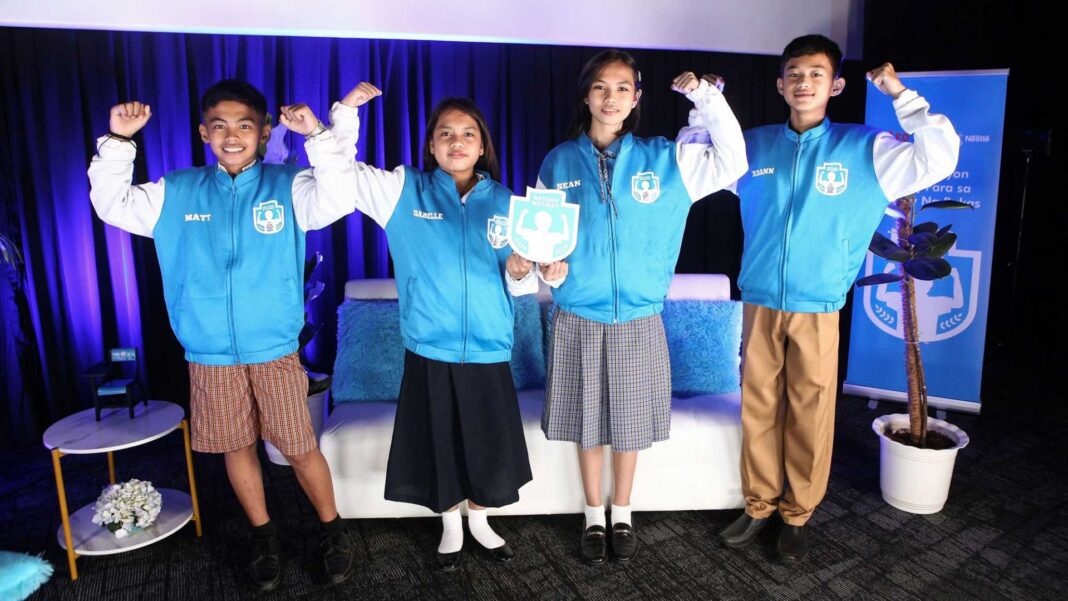 Most Filipino families — regardless of social standing — believe that education plays a vital role in a person’s success. That’s why this year’s Balik Eskwela is different and more important for many parents and students. As young learners transition back to the new normal after overcoming the uncertainties and difficulties brought on by the pandemic, Bear Brand is sparing no effort to inspire and encourage children to dream big and secure a better future for themselves and their families.

Recognizing exceptional students in the Philippines

Although every student made sacrifices and experienced difficulties in their studies over the past year, some kids faced harder challenges due to their everyday living situation. However, despite these obstacles, they have displayed their eagerness to learn and overcome life’s adversities. Bear Brand has been honoring the strength and resilience of these young people since 2018 through the Batang Matibay Awards. Last October 27, the 2022 Batang Matibay Awards was held in Screening Room 1, Cinema Complex of Estancia Mall, Pasig.

In partnership with the Department of Education, Bear Brand started the Batang Matibay Awards to recognize students who exhibited “tibay” in learning both in school and in life. This means not only do they show excellence in academics, but also the community and their families. Every Year, Bear Brand and DepEd call for nationwide nominations of ten Batang Matibay public school students from grades 5-6 who can serve as role models and inspirations to their families, school, and community.

One of the awardees is Jerald Pelonita from Guihulngan, Negros Oriental. Despite being born without arms, he rose above his peers and was hailed as Champion for the Division level National Art Contest. He displayed commendable skill in drawing and painting using his foot.

Cryzon Jay Ambinang belongs to the Manobo tribe that lives in a secluded area on a mountainside in North Cotabato. He walks more than 2 hours to get to one of DepEd’s last-mile schools. Despite his own personal struggles, he excels in school and extracurricular activities, which includes being Vice President of SPG in their school that leading several projects in their school. One of those is the distribution of modules in his community and organizing a feeding program for the Manobos.

Mark John Alayon from Roxas, Capiz is a model student despite his financial difficulties. His mother is a cancer patient while his father works as a construction worker. Even though the everyday struggles torment his young heart, he excels in school and is consistently chosen as a homeroom officer in class. He also joins programs sponsored by his school or barangay Mark John does all these while also helping his father raise livestock, plant vegetables, do household chores, take care of his mother, and study.

What all the awardees have in common are the lifelong learnings that are ingrained in them at a young age. Bear Brand wants to nurture their tibay ng isip, tibay ng katawan, and tibay ng kalooban and help them secure a better future by recognizing their efforts. In addition, with every glass of Bear Brand Powdered Milk, the awardees are provided with a holistic, Tibay Nutrition that will keep them strong while facing life’s challenges.

He advocates against bullying which he personally experiences to encourage and inspire children with or without disabilities to come out from their shells and radiate positivity in their hardest or saddest moments.

Jessica is a student at a last-mile school in North Cotabato. She walks 8km and crosses 8 rivers just to go to school. She once had to cross the river despite strong currents, and she was found crying by the teacher – not because she was scared, but because she lost the only pair of slippers she has and did not want to miss school because of it.

At her age, she carries additional responsibilities to help their family because they don’t have her father by their side. Because of financial scarcity, there are days they would survive on boiled bananas for meals. Despite these challenges, she shows resilience by excelling in school and extracurriculars.

She is an inspiration to the school/community as a consistent honor student since she was in 1st grade excelling even in extra-curricular activities such as local/international math competitions.

In addition to the brunt of the pandemic, the onslaught of super typhoon Rolly has greatly affected the educational system in Catanduanes – houses were destroyed, including the residence of Ashlei’s family. But no matter how many storms she encounters, she always faces them head-on. In fact, despite her personal struggles brought on by the typhoon, not only did she continue to excel in school, but she even helped in a relief drive in an orphanage, and also helped to tutor kids who were having difficulties in modular learning in Math. One of her tutees said that after being taught by Ashlei, Math became their favorite subject

Isabelle does not allow her epilepsy to get the best of her. When she started schooling, she had difficulty writing as a side effect of phenobarbital, an antiseizure medication. To compensate for her slow writing and keep up with her classmates, she would usually skip lunch only to end up still being the last to finish. Some classmates bullied her, construing her feeble writing skills and occasional staring (seizure episode) as a sign of being inferior. However, she was relentless in her effort to prove herself. She remained positive until one day her hard work paid off, and she was finally recognized as one of the most outstanding students in class. She also became a champion of an oratorical contest despite going through an emotional crisis. Her terminally ill father was confined in a public hospital at the time, and eventually passed away days after the competition.

She is always eager to take on challenges and new tasks each time she shows a firm resolve to succeed. She carries an unfaltering faith and a strong determination to overcome obstacles.

He grew up without a father, so his mother has to work abroad to support the family. Whenever he wants to talk to her, he would need to climb a mountain to get a signal. He tries to help support their family by helping with little chores (making broomsticks and collecting scraps as pigs’ feed). While doing this, he still extends his help to his classmates who he helps with their studies.

He may have experienced some defeat in school competitions, but it doesn’t stop him from trying again. Rather it inspires him to be better “Sa susunod na pagkakataon, makakaya ko na yun.”

Cryzon belongs to the Manobo tribe which lives in a secluded area on a mountainside in North Cotabato. He walks more than 2 hours to get to one of DepEd’s last-mile schools. Despite his own personal struggles, he excels in school and extracurricular activities, which includes being Vice President of SPG in their school that leads several projects in their school. One of those is the distribution of modules in his community and organizing a feeding program for the Manobos.

Sean Geralyn has an older brother with autism, she personally takes care of her Diko and even researches some tutorials on YouTube on how to handle autism spectrum disorder cases. Because of her love for her brother she tried to teach him how to read, write, draw, and other basic skills. She wanted her brother to feel that he is an important member of their family.

His mother lost her job due to the pandemic which affected their state of life. Instead of being sad and despairing, he came up with the idea of putting up their own snack bar to earn extra income. He’s been very involved throughout the process of building it – starting from brainstorming the menu, up to cooking and packing orders. He himself created the design and logo of their snack bar. This micro business helped them get back on their feet again. It also allowed Kyle to have his own computer that he uses for his study and journalism training/competition.

He can break barriers because he is approachable and friendly. He can make others see their talents and skills because he is not afraid that someone can be better than him.

Marchilyn was infected with the polio virus when she was little. Because of this, she is no longer able to walk. Her mother acts as her feet in going to and from school. Her struggles in life made her strong and dream to finish her studies to lift her family from poverty. Her willingness to go to school every day despite her condition, during the pre-pandemic is a testimony to how strong her determination is in pursuing her education.

Her positive outlook in life despite her physical struggles is very commendable. She has written two poems entitled ” Sa Gabay ng Tanging Ina” and “Physical Disability Never Stops me from being complete” depicting her life experiences.

He is consistently chosen as a homeroom officer and fulfills his roles beyond satisfaction. He also joins programs that the barangay/school is sponsoring. His mother is a cancer patient while his father is a construction worker. All his siblings want to attend school but few of them have the opportunity. Seeing everyday struggles torments his young heart but this inspires him to continue learning – finish his studies, and help his family in the future. He helps his father raise livestock, plant vegetables for sale and consumption, do household chores while attending the healthcare of his mother, and study.